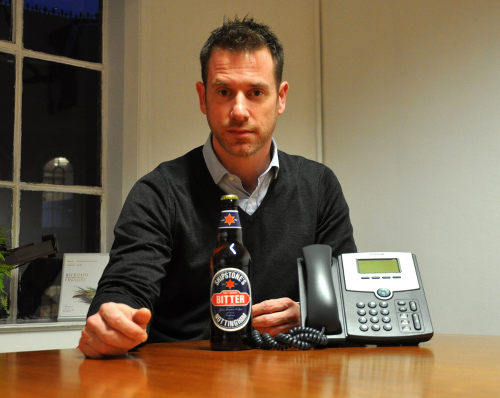 Following the re-launch of historic East Midlands’ favourite, Shipstone’s beer, the team behind the resurrected brand has installed an Actopia TritonVoIP telephone system.

Primarily working out of a home-office, founder Richard Neale and his team of sales reps are often out on the road speaking to pub landlords, shop owners and cash & carry stores.  After a busy start, the Shipstone’s beer was being stocked in over 50 locations in a little under three months.

Shipstone’s Beer required a cost-effective and flexible system that would allow for clear lines of communication between every area and aspect of the business.  When out on the road, it was vital that calls be forwarded from the office to mobiles and there was an option available to easily transfer calls to employees that would be able to deal with a particular client or query.

Shipstone’s Beer moved over to the Actopia TritonVoIP system in its central office and all employees smartphones were configured with an App that integrated the device as an extension.  Utilising the CISCO SPA500 series IP phone, the existing business number was transferred over in minutes and the system required nothing more than being plugged in and turned on before it was fully operational.

Since switching over, Shipstone’s as a business has reduced its telephone bills by nearly 40 per cent.  This saving has predominantly been due to the fact that all internal calls from VoIP phone to VoIP phone are completely free.

Given the high-growth nature of Shipstone’s, it has also proved extremely useful that the Actopia TritonVoIP system is scalable.  Any new members of staff on the road are only required to install the app on their mobile phones and office-based individuals can have a new CISCO unit ordered and plugged into the system.  There are also no multiple year contracts and the phones are not tied to a property, so if the business was to move to a bigger space, the phones only need to be moved and plugged into the new office.

For a new business that is setting up, the VoIP telephone system is a revelation.  The ease of just opening the box, plugging in and making calls puts the technology head and shoulders above the competition.

Add into the mix the money we are saving on our calls and it’s a no brainer.  The Actopia system is one that I would recommend to anyone.